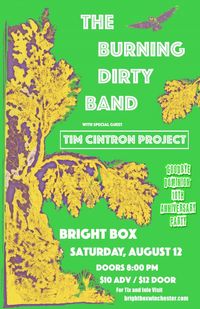 The Burning Dirty Band returns to the Bright Box to celebrate the tenth anniversary of their acclaimed release, 2007's "Goodbye Dominion." In addition to performing the album in its entirety, the band will also play classics from 2005's "17 Year Sun" and recent tracks from 2016's "Red Velvet." Since 2000, Burning Dirty has been writing and performing original rock music that is proudly local and distinctly creative. Don't miss these prolific hometown songwriters as they bust out nearly two decades worth of fan favorites and greatest hits.